I confess to being addicted to Ms Hayes’ writing, and I’m delighted to say her new release has done the impossible – exceeded all the brilliant novels that came before.

The sixties and seventies come to vivid life, and three teenage girls are drawn together by – wait for it – their differences. They grow up in a period of swift change in attitudes to sexuality, politics, and violence – everything from still-legal marital rape to the shooting of JFK.

Cordelia is the dreamer who goes to India to “find herself”, but what does she find? Surely a First from Cambridge University will please Beatrice’s family, but does she get one? Rosalind is one of twins, and her charismatic twin is trouble!

I recommend Exits and Entrances to readers who enjoy literary fiction, family sagas, romance – anybody willing to lose themselves in a good story that leaves them satisfied whilst looking forward to the sequel. 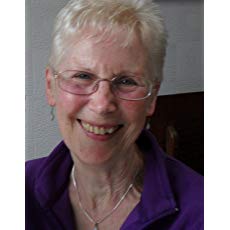 Now, a fascinating insight from the author on how this book came to be written and the planned development of the trilogy.

One day they suddenly manifested in front of me – three schoolgirls, clamouring to have their stories told… one shy, one feisty, and one decidedly cynical. Was it a waking dream, or one of those strange events that occur when the muse is tapping at my door, demanding entry? I could see them so clearly in my mind’s eye, and felt I somehow already knew them – Cordelia, Rosalind, and Beatrice… aged fourteen, dressed in their Blackheath High School uniform, so brashly innocent of all that was yet to come that it touched my heart… Their school motto ‘Knowledge is now no more a fountain sealed’ was bound to prove prophetic, had the Public Day School Trust but known it, having been taken originally from the highly erotic Song of Songs and referring to carnal knowledge.

I won’t describe the girls because if you’ve begun to read Exits and Entrances you’ll already have formed your own idea of what they look like. They kept visiting me, sometimes speaking to me at inconvenient moments (often in the shower) insisting that I recorded accurately whatever it was they were telling me. They each had a different voice, and a different story. They wanted me to be their scribe, but I still hadn’t decided whether I would take them on. And then a peculiar twist occurred. I saw them all not at fourteen but at seventy – the same girls, but women now, facing all the things that women face in later life. They were talking together, quite ignoring me. They had already solidified from their original ghostly forms and taken on flesh and bones. They had grown. They had aged. They had evolved enough to discount me. They had a lifetime of history. I finally submitted. They knew their life stories, but I didn’t yet. There was only one thing to do – write it.

As always happens when I come to the end of writing a novel, I am already grieving for the loss of the characters I have come to understand so deeply. They are real to me. I have felt their pain (which as any writer will confess is also my pain, indelibly entwined in theirs.) I have watched them struggle and learn what it means to pay the price of being human, just as we all do. I have resisted rescuing them from their inevitable disasters and transgressions. My task is merely to record how consequences transpire from the choices they make. They are as much at the mercy of fate and karma as any of us. There is a natural trajectory in their paths and all I need to do is follow it. And that is as much of the process of writing as I’m able to describe. To go further would be like pulling the wings off a butterfly. I know when stories begin and I discover how they end, and the journey that takes me there as a writer goes far deeper than I can explain.

This book, and the two that will follow to complete the trilogy, feels important to me. It is written for women of every age, and the men who love and strive to understand them. Each woman’s personality is complex and unique, and yet aspects of her experience will resonate whatever her individual story happens to be. It is also written for men, whose social roles and identity have changed a great deal over the last six decades, and who struggle in other ways to survive life in this turbulent society. The old adage asserts that if you remember the sixties you weren’t really there, so whether you were around then or not, Exits and Entrances will give you an idea of what it was like – not for everyone, of course, but for these three girls in particular who so insistently stepped forward into the limelight of my imagination to reveal how it was for them.

As always with my books, I welcome feedback, whether in the form of a review or a simple message to let me know what it meant for you. And if you have reached the end of it and have enjoyed it so much you are eager to know when the next one will be published – be patient. Cordelia, Rosalind, and Beatrice are still telling me their stories, one revealing chapter at a time.

2 thoughts on “Lesley Hayes – Making Her Entrance Again With Her Usual Flair.”