Boston Dialect, Volumes One and Two  Reviewed by Sarah Stuart for Readers’ Favorite

The first poem in Boston Dialect: Volume One, Ashes Lent, gives a hint at a religious, or at least deep-thinking, man in Paul Tait. According to the introduction, none of the poems had titles originally; they were an expression of his on-going thoughts. The titles are intriguing, and the sheer number of poems – more than in any poetry book I have read before – gives a clue as to how much they vary and, to a degree, reflect a fascinating life. But this is more than a life-story, or part of one, of a musician – singer, pianist, band leader, and composer, because Paul Tait delves deep into his psyche, and his poetry is powerful due to that. Join him and be enriched by the experience.

Boston Dialect: Volume One is a book that left me wanting to read Volume Two: the sign of a very good book whatever the genre, but I confess to a love of freestyle poetry – words unhampered by the need for rhyme or verses, and these flow one into the next like a river running to the sea, sometimes fast with floodwater and at others peaceful. It’s impossible not to choose favourites and these were mine. I Know as Much as I Do: We are the Children of Promiscuous Sin, Art Net Confines – who could resist “The gain and the cost The chain and the frost I can tabulate”? – and, I Thought I Knew the Way Back to God. Paul Tait’s Boston Dialect is inspirational; to read his poetry is to pass through a gateway into another world. 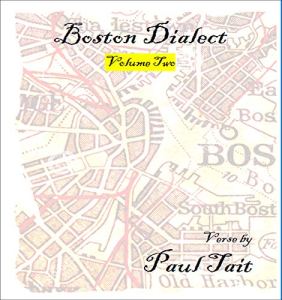 Boston Dialect: Volume Two is a positively gluttonous feast of over a hundred freestyle poems that I had been looking forward to hungrily since I read Boston Dialect: Volume One. It is a rare treat to find so much by a living poet presented together, but Paul Tait is a very prolific writer who allows his imagination free rein over almost every subject under the sun. They reflect yet more aspects of the poet’s “real life”, because he is creative musically too – composer – pianist – singer, and as haunted as we all are by birth, death, and the search for love. The very last poem, Unfinished Music, says it all – “Unfinished music fills my book, work unwritten distracts my look, timeless wanders to the orchid of love I go”.

To quote the title of one of Paul Tait’s own songs, “I didn’t quit I surrendered” when I opened a copy of Boston Dialect: Volume Two. Nothing else existed for me; I was captivated until I reached the end and, of course, I have my favourites. There are poems to fascinate every reader, but these called to an echo in my mind and heart. The Mystery of Me, Train to the Heart of Tomorrow, Boston Weather, Mozart on the Grand, and the heartfelt FedEx Traffic Log. Some are long and some no more than four or five lines – they all make you stop, think, and feel. In Boston Dialect: Volume Two, Paul Tate has given us a book with worldwide appeal that whets the appetite for more.