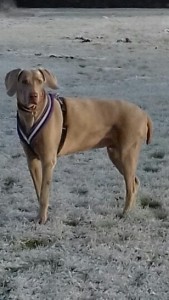 The dog I have at present, a Weimaraner, looks very different from Ben, the Jack Russell in the Richard and Maria books, but she was the inspiration behind a lot of his character traits, so maybe that’s why readers fall in love with him. She came from The Blue Cross, “too old” at eight and still full of life at thirteen, but it took her a long time to believe she had found what The Blue Cross call her “forever home”.

The Blue Cross helps animals of all kinds from hamsters to horses, but I found them when I was looking for a dog to rehome, and I was very impressed with the care they took to make sure I had a suitable home to offer. The questions ranged from the amount of exercise I was prepared to provide to whether children lived with me or visited frequently. They also spoke to the veterinary surgeon I use regularly and asked for a reference, and there was a delay before I could collect the dog I’d chosen, and they deemed right for me and my lifestyle, until they obtained that reference. They also arrange insurance for pets of any age, and they have a number to call for advice if needed. Nothing is left to chance for the animals The Blue Cross give a second chance.

Tap the photo to find out more about The Blue Cross. Their website offers the chance to donate directly, rehome animals, get advice on your pet, or shop for Christmas gifts.

Note: The Blue Cross is a British-based animal charity, but my donations cover the world – North and South America, the Artic, and many countries in Africa – anywhere animals, and those caring for them, need help.

The illegal trade in wildlife, which includes endangered species, illegal logging and fishing, is now the fourth largest criminal enterprise globally following drug smuggling, human trafficking and counterfeiting. According to a joint United Nations Environment-Interpol report, the illegal trade in wildlife is 26% higher than previously estimated, worth as much as USD $23 billion per year.

Pangolins are the most trafficked animal in the world with scientists estimating that over one million pangolins have been poached from the wild and illegally traded in the past decade. All eight species of Pangolin are classified by the IUCN as threatened with extinction, and that is just one of many animals that desperately need our help.

Others, sadly, are rejected pets. Bought or adopted and then thrown out to fend for themselves in a world of which they know nothing.

I donate all royalties from every book sale to charities that help to protect wildlife worldwide. Solving the problem alone is impossible, but with your help, we can make a difference.