As a long-time fan of Sarah Stuart’s quirky and controversial romances, I was excited to read her latest offering; Three Against the World: A Waif, A Stray and the Search for Romance. I was certainly not disappointed. When Richard’s ex-wife unexpectedly drops a fourteen-year-old girl on his doorstep one night and claims, she is his daughter, Richard’s life changes forever. Richard, Maria and their rescue dog, Ben, suddenly finds themselves as “three against the world”. Richard is determined to do whatever he can to make-up for Maria’s terrible childhood at the hands of her mother. The best solution, in Richard’s mind is to find himself a loving wife who can be a stepmother to Maria and create a happy family for them all. Chaos and misunderstandings ensue as Richard and Maria build a relationship, searching ultimately for trust and unconditional love.
Stuart’s work has obviously been deeply affected by her love of music and specifically musical theatre, something that is plainly evident in this story also, with even the chapter titles named after songs and show tunes. Her character development of the two main characters (three, if you count the dog Ben) is, as always superb. As readers, we come to love the three characters, as they seek to place themselves in a world that, at times, seems to reject them. As a Father, I can fully identify with Richard’s desire to protect and love his newly acquired daughter with every fibre of his being.
Stuart’s romances are never straight-forward and Three Against the World is more proof of that. The quirks and twists she throws into this love story are what lifts it above the run-of-the-mill romance stories. I absolutely loved this story and do not hesitate in saying this is her best work, I’ve read, so far. I can highly recommend this story to anyone who likes quirky, dark-humoured, typically English romances. If you love human foibles, you will love this story.

Grant Leishman is a prolific writer from the Philippines, and he uses the island setting very effectively in his books. This was the first I read, but not the last. 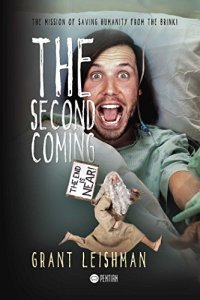 The Second Coming is the first in a trilogy of very clever, often funny but never offensive, books on the life of Jesus Christ. As Lord Andrew Lloyd Webber said, “in 33BC there was no mass communication”, so what would it be like if He came back today?

Click the cover to find out more or buy.